​Seminars and Lectures in the Department of Chemistry & Chemical Biology will be held in a hybrid format during the 2021-2022 Academic Year (unless otherwise noted). Please contact our Seminar Coordinator at chemseminar.edu for additional information.

The Andreas C. Albrecht Lectureship established in 2006 with the support of alumni, friends, the Albrecht family, and the Department of Chemistry & Chemical Biology, will honor, in perpetuity, the spirit and accomplishments of Andy Albrecht.  The inaugural lecturer was Eric Heller.

This is the oldest and one of the most prestigious series of endowed lectures sponsored by a chemistry department at an American university.  Formerly, this was a six-week residency wherein the Baker lecturer gave two formal presentations per week to a large and diverse audience and provided an informal seminar weekly for students and faculty members interested in the subject. The lecturer had an office in Baker Laboratory and was available to faculty and students for further discussion. The Department changed the Baker Lectures to the current multiple-lecturer symposium format in 2008.

Covestro LLC is one of the leading producers of high-performance polymers in North America and is part of the global Covestro business with 2015 sales of EUR 12.1 billion. Covestro manufactures high-tech polymer materials and develops innovative solutions for products used in many areas of daily life. The main segments served are the automotive, electrical and electronics, construction, medical and sports and leisure industries. The Covestro group has 30 production sites around the globe and employed approximately 15,800 people at the end of 2015.

In 1978 the Halocarbon Products Corporation sent a $20,000 check to the Department of Chemistry. A Special Fund was created with the money and it was left up to the Department on how the money was to be used. The Department decided to use the income from the Fund for outside speakers, especially to ensure the continuity of the Biological Chemistry Lectures, which were started in 1969 and previously supported by the NIH.

In honor of the late Moses Passer, Ph.D. '48 and former American Chemical Society director of education, his widow, Dorothy Passer, has endowed the Moses Passer Lecture Series in the Department of Chemistry & Chemical Biology. The first lecture was presented in the fall of 2002 with Cornell President Emeritus Frank H.T. Rhodes giving the lecture followed by Charles Casey, University of Wisconsin and the then President-Elect of the American Chemical Society, Arthur Ellis, University of Wisconsin at Madison and the National Science Foundation and David Pimental, Professor of Ecology and Agricultural Sciences at Cornell University, this lecture took place as part of the Challenges of Energy in the 21st Century Symposium.

Peter Joseph Wilhelm Debye came to Cornell as a Baker Lecturer in the Fall of 1939. Debye, who was a Dutch citizen, had decided to leave Germany, where the Nazis were in control, and was persuaded to remain at Cornell as Professor of Physical Chemistry and Chairman of the Chemistry Department. In 1962 when the plan to establish a lectureship in his honor was presented to him, he gave his approval but only with the stipulation that the very highest standards were to be maintained. This condition has been faithfully observed. The first lectures were given in the Spring of 1963 by R.B. Woodward, and he has been followed by a series of distinguished scientists from around the world.

The series is named in honor of an endowment by the family of Franz Roessler, a German chemist who emigrated to the United States in 1882 to found the Roessler and Hasslacher Chemical Company.  The company became part of Dupont in 1930. Roessler's son, Hans, was a student in Cornell's Department of Chemistry in the early years of the century. Roessler family endowments support a named professorship in the Department of Chemistry as well as lecture visits by prominent scientists from German Universities. 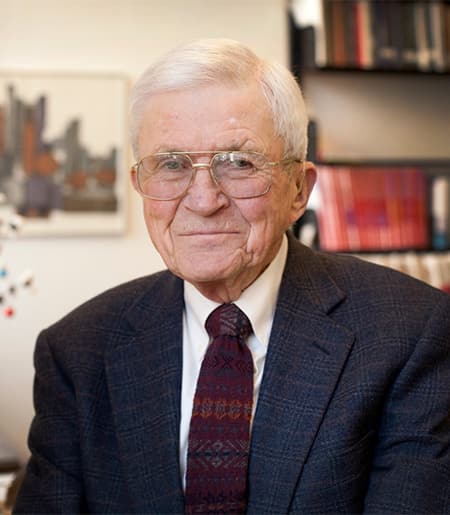