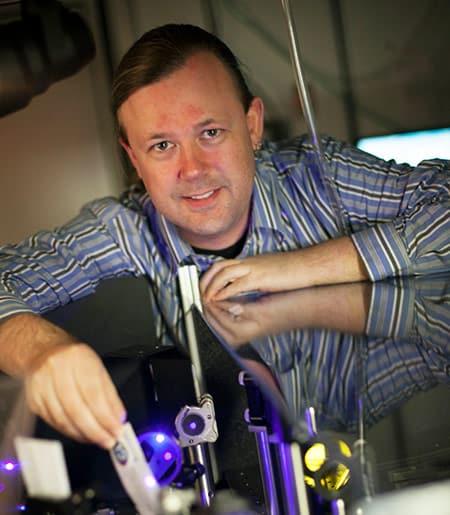 The Petersen Group is focused on developing and utilizing novel nonlinear optical vibrational spectroscopies to directly probe ultrafast dynamics at surfaces and in the bulk.

Our research program is focused on developing and utilizing novel vibrational spectroscopies to directly probe ultrafast dynamics at surfaces and in the bulk. Time-resolved methods utilizing multiple laser pulses of femtosecond (10-15 s or fs) duration facilitate studying molecular processes and chemical reactions on the natural time-scale of molecular motion. Transient visible spectroscopy is commonly used to probe ultrafast dynamics. However, as visible spectroscopy inherently probes the electronic structure of the molecules, it is not only sensitive the nuclear motion but also to electronic state transitions and the dynamics of the solvent environment. This often clouds the interpretation of transient visible spectroscopy and has resulted in several controversies in the literature. Mid-infrared (IR) spectroscopy, on the other hand, directly interrogates the chemical bonds molecules are composed of through their vibrational frequencies and thus offers a more direct and local probe of molecular structure and nuclear motion. However, ultrafast IR spectroscopy is very challenging and heavily technology driven. Progress is driven by advances made to current technologies and the development of new laser sources and techniques that shed new light on existing problems, resolve controversies, and often lead to the discovery of completely new and unexpected phenomena.

We are currently developing two new ultrafast IR methods for probing the dynamics at surfaces and in the bulk:

These two spectroscopies build on Petersen's expertise in surface-specific spectroscopy from his graduate research and on 2D-IR spectroscopy as well as the generation of continuum mid-IR laser pulses from his postdoctoral work. The new spectroscopies will provide the tools needed for studying a series of ultrafast phenomena that are currently not possible or very challenging. While the novel spectroscopies have wide applicability, we are focused on applying them to the following systems: